In most commercial and industrial buildings, the load energy consumption varies throughout the working day, with telling peaks and troughs. To meet this fluctuating demand, utility providers start and stop different electrical plants to match the global offer and global demand.

Some of these electrical plants only operate a few times a year to always deliver the proper quantity of electricity no matter the demand peak during the year.

But how can a building avoid these penalties and reduce its bill without changing its load profile? Peak Shaving can be one solution to solve this issue.

What is peak shaving?

Peak shaving generally refers to leveling out peak use of electricity by industrial and commercial power consumers. The first purpose of Peak Shaving is to save on the electricity bill. How does peak shaving help to reduce costs?

To better understand the stakes of peak shaving, let’s start by figuring out how the electricity bill is structured. The electric company monitors your power consumption at fixed time intervals every 15 minutes. The measurement of how much electricity is being consumed and at what rate it is in kW. In fact, for large users, such as manufacturing and distribution facilities, the electricity bill consists of two parts:

In practical terms, Peak Shaving is the process of reducing the amount of energy purchased – or shaving profile – from the utility companies during peak hours of energy demand to reduce the peak demand charges and make savings. In other words, it consists of flattening the load profile.

With peak shaving, a consumer reduces power consumption (“load shedding”) quickly and avoids a spike in consumption for a short period. This is either possible by temporarily scaling down production, activating an on-site power generation system, applying energy shifting, or relying on a battery.

For some industries, and their production’s proper functioning, changing the load profile can be difficult. However, a company can provide its own supplemental power to avoid peak loads.

Additional power could come from alternative sources such as an energy storage system, gensets, and/or power plant. This creates a time-limited provision of power from the electricity storage facilities and/or a generator within the company’s grid, absorbing the additional peak load.

The basic concept behind this strategy is straightforward:

This strategy allows to save on electricity bills on three different levels :

Furthermore, peak shaving with batteries isn’t something you must actively manage. With an energy management system well configured, your energy storage system can intelligently regulate the battery charging without human intervention. 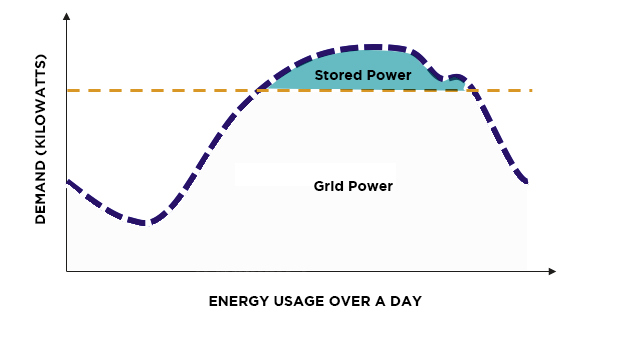 Regardless of the chosen configuration, implementing an EMS is a must-have to achieve peak shaving applications for C&I installations.

Elum’s Microgrid controller is compatible with most solar inverters brand, storage inverters brand, and other distributed resources. Our controller allows the BESS to charge from the grid during the off-peak hours and discharge when the load is high, taking into account the local pricing and grid specificities

This website uses cookies to improve your experience while you navigate through the website. Out of these, the cookies that are categorized as necessary are stored on your browser as they are essential for the working of basic functionalities of the website. We also use third-party cookies that help us analyze and understand how you use this website. These cookies will be stored in your browser only with your consent. You also have the option to opt-out of these cookies. But opting out of some of these cookies may affect your browsing experience.
Necessary Toujours activé
Necessary cookies are absolutely essential for the website to function properly. This category only includes cookies that ensures basic functionalities and security features of the website. These cookies do not store any personal information.
Non-necessary
Any cookies that may not be particularly necessary for the website to function and is used specifically to collect user personal data via analytics, ads, other embedded contents are termed as non-necessary cookies. It is mandatory to procure user consent prior to running these cookies on your website.
Enregistrer & appliquer
Microgrid Impact Challenge